King of Kings, a painting exhibition in honor of Thailand’s late monarch, His Majesty King Bhumibol Adulyadej by famed American artist and musician Maura Moynihan, is on show at 23 Bar & Gallery from now until May 13, 2017.

This is the second time Moynihan has exhibited her art at this popular exhibition space located in Bangkok’s Chinatown. Her first exhibition was held there in October 2016, one week before the passing of His Majesty King Bhumibol Adulyadej.

She was inspired to paint a series of portraits of His Majesty King Bhumibol Adulyadej, working with iconic photographs that for decades have hung in every Buddhist temple (wat), market and Thai household throughout his remarkable 70-year reign. He was revered as a statesman, monk, soldier, musician, painter, photographer, inventor, and sportsman who was fondly known as the “Development King.” He combined a regal bearing with a common touch, ever striding through fields and jungles with pencils, map, and cameras, always striving to improve the lives of Thai people.

“For so many years I loved and admired Thailand’s ‘People’s King’, a catalyst of modern Asia who steered his nation through massive social, economic and political transformations, whose vision and energy made Thailand the most stable and prosperous country in Southeast Asia. When I joined the tens of thousands of Thai citizens at Sanam Luang on 22 October, 2016, to sing the royal anthem under the baton of Somtow Sucharitkul, I was profoundly moved by the love and respect the Thai people felt for this great and good man,” said Moynihan.

In this official year of mourning, she has visited many exhibitions portraying the scope and brilliance of his life and achievements, as people of Thailand pay homage to their gifted sovereign in creative expressions of art, literature, and music.

“There is a Tibetan saying that such a leader is as rare as a star in daylight. Farewell, kind Dhamma Raja, we shall not see your like again,” she added.

King of Kings, from Maura Moynihan is on display in the exhibition space at 23 bar & gallery. Located in the beautiful old town area of Charoen Krung, it serves those who appreciate art and culture with regular exhibitions by prominent Thai and international artists.

Maura Moynihan moved to New Delhi in 1973 when her father, New York Senator Daniel Patrick Moynihan, served as the United States Ambassador to India. Her dedication to the people and cultures of Asia continues to this day. She graduated from the American International School, New Delhi, known as “Hindi High,” and learned to speak Hindi, Urdu and Tibetan.

Over many years she travelled to India, Kashmir, Nepal, Bhutan, Sri Lanka, Pakistan, Afghanistan, Uzbekistan, Bangladesh, Thailand, China and Japan. She studied the music and art history of each country, which inspired her songwriting, and the creation of three albums: Yoga Hotel, Bangkok Taxi and her latest release: Bombay Superstar.

Moynihan worked on the Smithsonian Institution’s Festivals of India and is an advisor to the Asian Heritage Foundation in New Delhi, where she has forged relationships with prominent Indian artists in the performing and visual arts.

At twenty-three, a Harvard graduate and musician, Moynihan appeared on the cover of Andy Warhol’s Interview magazine, and for five years she and Warhol worked together at Interview and co-hosted “Andy Warhol’s TV.” She is the best-selling author of two works of fiction including Yoga Hotel, Covergirl, and penned a poetry collection: Kaliyuga.

Moynihan earned a BA from Harvard University and an MA from the New School in Manhattan, where she studied international affairs, communications and management. She speaks Hindi, Urdu, Tibetan and French. She has exhibited her paintings in gallery shows in India, Nepal and the USA. 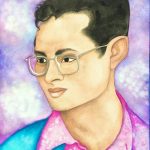 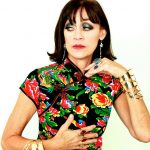 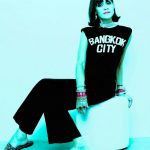 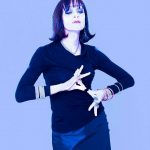 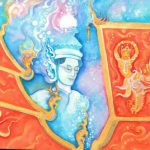 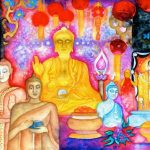