Surfing, coconuts, monkeys, and sunsets – this small island nation south of India is bustling big with energy, culture, and beauty. I started off my journey in Hikkaduwa, a southern coastal town approximately 98km from Sri Lanka’s capital, Colombo. Without knowing anything about the area, I used Airbnb to book a room at the Banana Leaf Apartments. This guest home is hidden away in the jungle next to a cinnamon plantation. Although quiet and secluded, it’s only a 5-minute tuk tuk (a three-wheeled motorized vehicle used as a taxi) ride from the main road and the beach.

The first thing I noticed was the raw nature and wildlife. It wasn’t my first time visiting the tropics but it was the first time I’ve felt such energy from the land and a true sense of wilderness. The air was never quiet. From birds chirping and unidentifiable animals making their calls, to the rustles of the giant monitor lizard that ran past me in the garden. This place is beautifully wild. Hikkaduwa beach is absolutely serene. I expected it to be full of tourists, as most island beaches tend to be, but it surprisingly wasn’t. It doesn’t feel commercialized in any way. The beach is lined with small local restaurants as well as charming hotels and bungalows. The people are extremely nice and welcoming with that surfer island vibe. The east side of the water on the beach is perfect to swim in, if you like duck diving under small waves like I do. I caught the sunset further down the beach later that evening which was absolutely breathtaking. The sky became a deep orange and among it were surfers catching their sundown waves. I sat back, taking it all in while sipping a king coconut. My next stop was Galle, a city on the southwest tip of the Island that was once colonized by the Dutch. I stayed at the monumental Galle Fort, in a beautiful colonial villa called Lighthouse 41. This place was nothing like I’d ever seen. I felt like I was in a different country compared to the day before. The Dutch built Galle Fort in the 17th century, and its distinct European infrastructure is definitely a must-see. The cobble stone roads, colonial homes, and catholic churches all mixed in with a few tuk tuks driving along and women in colorful sari’s walking by. It felt as though I’d traveled back in time

Aside from the historical wonders, I spent some time surfing at Deveta beach. This is a great beach for surfing, and only a 5-minute ride from the fort. The waves are perfect in size and the people are smiling as usual; it wasn’t crowded either. There’s a surf school on the beach as well, with friendly local instructors for hire. If you’re not in need of a surf lesson, boards are available for rent for about US$5 per hour. I surfed for two days in a row and it was one of the nicest surf breaks.  A lot has to do with the fact that it wasn’t overcrowded like most surf spots. It was great to just be in the warm water chilling out and catching the waves. My last stop was Unawatuna. Now this place was cool. I had the option of staying at a luxurious villa again but decided on something a bit different. A treehouse. Yes, that’s right, a tree house in the hills. Again, I used Airbnb, and found and amazing treehouse with an open living concept. This two level treehouse was made of glass, with large balconies surrounding the perimeter. When I arrived there were monkeys everywhere!  At that moment I began to realize how different this stay was going to be. Since it’s an open living concept there is no air conditioning and birds and butterflies among with other playful critters were free to fly in and out. The bedrooms have sliding glass doors, which I kept closed, but the living room was recommended to be kept open. It was astonishing really how immersed in nature I was. Geckos, praying mantises, woodpeckers, and frogs were only a few of the creatures I encountered. It was enlightening to live as a guest among others in the jungle, and not the other way around. Although in the hills, I still managed to stumble upon yet another beach. Jungle beach, that is. Jungle Beach is a secluded lagoon where ocean meets jungle. It wasn’t too far from the tree house, either. It’s a 10-minute hike down a dirt path through slippery slopes and overgrown trees. Once I reached the bottom, white sand and friendly local beach dogs greeted me. The beach was actually the most populated with tourists of all the beaches I went to. This was surprising as it was the most secluded one so far. Nonetheless, it was beautiful and the water was calm without waves. There’s also a local restaurant on the beach, so I went for lunch and spent a couple of hours relaxing with a few swims in between.

All in all, the Sri Lankan experience was unforgettable. In six days I explored about five percent of the island, which was full of culture and beauty. This country has a lot to offer; I look forward to my next visit and for what the rest of the island has to offer. 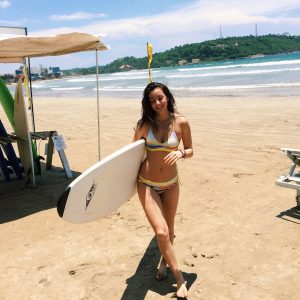 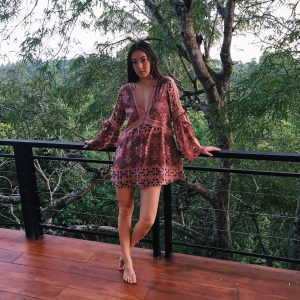